Black Art in America is proud to present

Our Image is Our Message: As told by Black Women Artists

As this year’s March on Washington Film Festival celebrates contributions of black women to the Civil Rights Movement—this exhibition of legacy and contemporary black women artists explores the stories, and perspectives of black women, as told through art. As this group show highlights a range of narrative, and figurative works that delve into the lived experiences, observations, and aspirations of black women artists through time. With works in the show spanning a period of 40 years, this exhibit is intended to give the viewer a glimpse into how black women artists have grappled with questions of history, social ills, and their individual strivings. Featuring works from legacy artists Elizabeth Catlett, and Dr. Samella Lewis, in conversation with contemporary women artists Joyce Owens, Lavett  Ballard, Evita Tezeno, Lynn Marshall-Linnemeier, Phyllis Stephens among others — bearing witness to these artists varied approaches to self articulation, and social concerns.

Faron Manuel is an independent curator, and art writer based in Atlanta, Georgia. Since 2016 Faron has also been the coordinator of the Mellon Undergraduate Curatorial Fellowship, and the Mellon Graduate Fellowship in Object-Centered Curatorial Research at the High Museum of Art. Prior to joining the High Museum, he was the Special Projects Curatorial Assistant to the Director of the Clark Atlanta University Art Museum. While at the CAU Art Museum, he curated his first exhibition, Négritude (2015)—that explored a French literary and philosophical movement within the African diaspora through art, before receiving his B.A. in History from Clark Atlanta University in 2015. He later served as the Assistant Editor at Black Art In America from 2015-2016, where he regularly interviewed collectors, and reported widely on contemporary art.
Faron recently collaborated with Black Art in America, to produce a catalog title Gerald Lovell, A Portrait for the artist, Gerald Lovell—where he wrote an essay that chronicles Lovell’s journey as an artist, and provided an introduction and curatorial statement to Lovell’s first solo exhibition, Sylvia, Sylvia, at The Gallery | Wish in Atlanta in 2019. 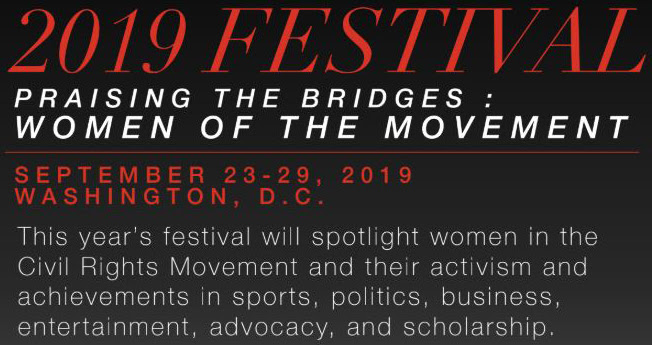 The flagship festival is held every year in Washington, DC and serves as a national platform to tell, celebrate, and increase awareness of the untold events and heroes, known and unsung, of the Civil Rights Movement. The Festival uses film screenings as a platform for panel discussions featuring filmmakers, academics, and activists and brings together an audience that is diverse in age, class, and ethnicity.

Over the years, the Festival has proven to be a successful civil rights legacy project: connecting with tens of thousands of attendees, attracting celebrities like Diahann Carroll, 9th Wonder, Ta-Nehisi Coates, and prominently highlighting Civil Rights legends like Dorie Ladner, Judge Damon Keith, and many more.

The FIVE Spot: SISTAS WITH FLOWERS